Since 2012, the Eurojackpot has thrilled Europe with its sizeable jackpots and favourable chances of winning.

It's often compared with the EuroMillions lottery, and although the starting or maximum jackpots aren't as large, it's easier to win, cheaper to play and still offers great prizes over 12 divisions.

With a starting jackpot of AUD$15 million and a jackpot cap of AUD$140 million (€90 million), it still puts up some very impressive numbers!

The Lottery Office is thrilled to announce that we can now offer customers our own European Jackpot that is matched with this very popular European lottery.

The EuroMillions lottery proved extremely successful. However, it was only available in a select group of European countries.

Its immense popularity made it obvious that European countries where EuroMillions wasn't sold could benefit from their own lottery. And the Eurojackpot was born! The first draw was in March 2012.

Several more countries have since been added, and today it's now sold in 18 countries, as opposed to 9 for the EuroMillions.

Did you know: Spain is the only country in which both the Eurojackpot and EuroMillions are sold!

Prizes, and lots of them

Due to the fact that there are so many countries participating in the Eurojackpot lotto, it's able to offer jackpots larger than those found in a traditional national lottery.

As a result you'll find that you don't have to win first prize to walk away happy. It's quite normal to see second division prizes well in excess of AUD$2 million. Even the third division is regularly worth well over AUD$300,000!

Another great feature is the jackpot cap. When the jackpot amount reaches its AUD$140 million limit, any excess prize money above this amount rolls down to the next division with a winner. This means an already very impressive division 2 or 3 win could be worth substantially more. It's not only jackpots that can make people multi millionaires!

There are 12 prize divisions all up, bringing hundreds of thousands of cash prizes each draw.

Thousands of players each week are checking their Eurojackpot results to see if they're the next to win big.

Did you know: Even though there is a jackpot cap of AUD$140 million, a syndicate of 50 players took home more than the cap amount, by a hefty AUD$3 million! This is because they also won several other smaller prizes, taking their grand total to AUD$143 million.

How do I play?

If you are having problems coming up with your numbers, we have some great tips, here, to help you on your way. You can even have us select your numbers for you at random.

The Eurojackpot is drawn each Friday night in Helsinki, which is Saturday for us here in Australia and New Zealand.

Don't forget, for each ticket you buy in our own government licensed European Jackpot lottery, we buy a matching ticket in the corresponding Eurojackpot draw.

How do I win from the Eurojackpot?

To win a prize from a Eurojackpot lottery draw you need to match 2 main numbers and 1 euro number with the numbers drawn. Easy!

The single most effective way to boost your odds of winning a prize is to play more games. The more games you enter, the more your chances improve.

There are a few different ways to go about this. You could play several games into 1 single European Jackpot draw, or you could play your numbers over several draws.

Another option is to buy a combo entry, which also gives you the chances to win from our other lotteries at the same time.

A Finnish jackpot winner waited for 3 months to come forward, after prompting speculation that the win would never be claimed.

Smart, very smart! Taking your time to stop and plan is a must after winning such vast wealth.

They were also able to remain anonymous, and all winners with The Lottery Office can do the same. 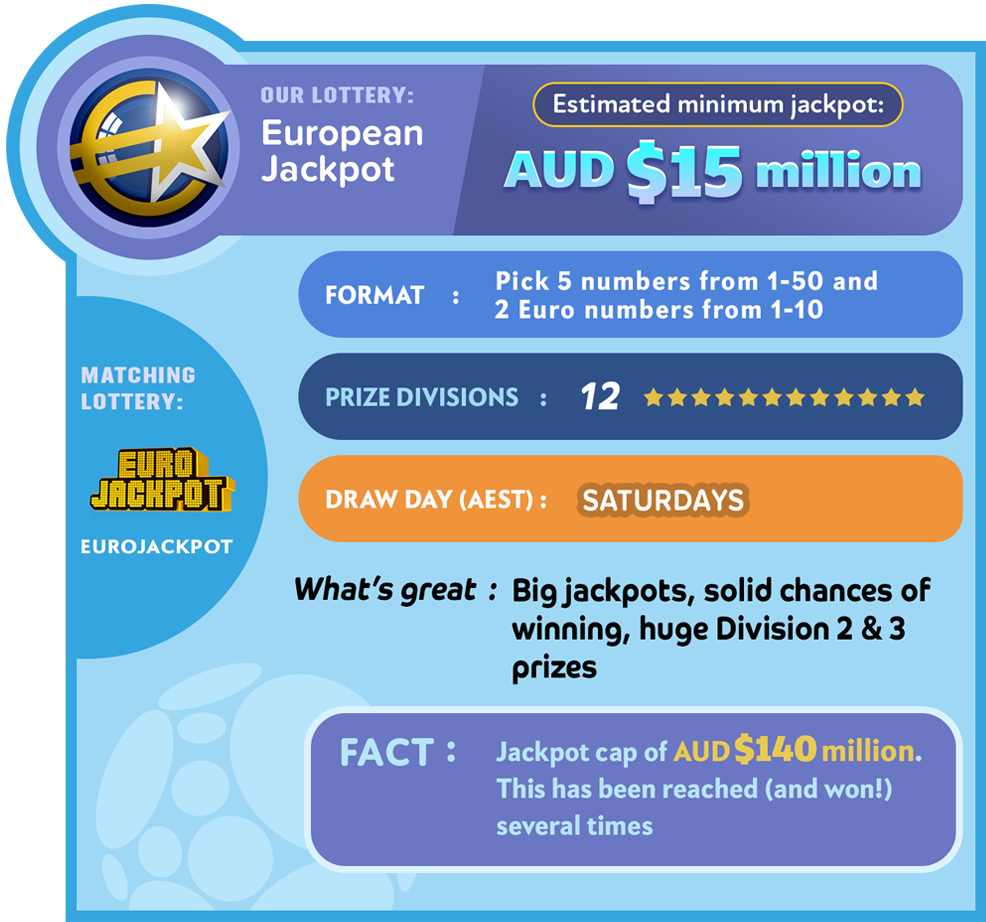