EuroMillions superdraws – all you need to know

As humans we love anything that’s supercharged. We all dream of having superpowers. We eat supersized food. We watch in awe as supermodels strut down the runway. So, it’s no wonder EuroMillions created their very own SUPERDRAWS.

The first EuroMillions superdraw was held in 2007 and they continue to wow us with huge jackpots and big lottery winners. Although no-one knows when a superdraw is going to be held, you can bet that as soon as the official lottery organisation makes the announcement, we’ll let you know!

What makes EuroMillions' superdraws so special?

EuroMillions lottery is one of the most popular lotteries in the world. It’s well known for making millionaires across Europe. Every so often the lottery will announce an upcoming superdraw. It’s just like a regular draw, but it offers a much higher jackpot prize. A superdraw sends jackpot prizes sky-high! 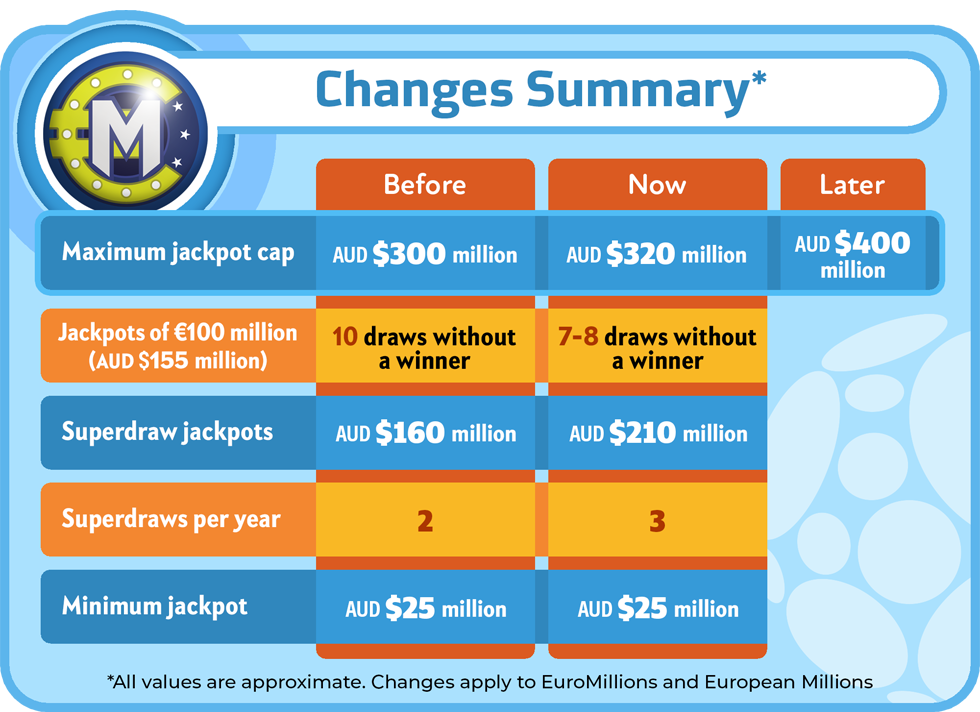 In 2019 one lucky individual became UK’s biggest prize winner, pocketing a whopping £170 million (over AUD$305 million). It was won by an anonymous player after the jackpot rolled over 18 times!

The ticket was sold in Las Palmas, Gran Canaria. Las Palmas is a popular tourist destination, so we’re not sure if the winner was a tourist or a Spanish resident. Either way, this win would have changed their life forever!

In February 2019, a family syndicate in Dublin celebrated a jackpot win of €175 million (AUD$285 million), the biggest jackpot claimed in Ireland.

One of the winners said he didn’t sleep a wink the night before and was in shock after the win, “I actually got a sick stomach and my legs started to shake”.

This EuroMillions jackpot win was the 14th in Ireland.

How to play to win from the draws of EuroMillions

If you’re outside of Europe it’s against the rules to buy a ticket and collect prizes directly, however as an Australian you can still play to win from EuroMillions lottery draws.

When you purchase a ticket in our European Millions draw here in Australia, we buy a matching ticket in the corresponding EuroMillions draw in Europe. There’s no betting and we don’t rely on insurance to pay you your prize money.

When The Lottery Office purchases the matching ticket, it stays in Europe and we collect the prize locally. If your ticket in our matching lottery is a winner, we pay the exact same amount that we collect into your account. No fees and no commissions.

Our finances and procedures and audited and we are licensed by the Northern Territory Government of Australia. For that extra peace of mind, ongoing live audits of customer orders against tickets are also carried out.

Providing you’re over 18 years old and a resident of Australia or New Zealand, you can sign up for an account with The Lottery Office and start playing to win from the draws of EuroMillions.

Connect with us via The Lottery Office app

Download The Lottery Office app for Android or via the App Store.

The Lottery Office App is great! You can:

When you play lottery with The Lottery Office you’re making a difference in the lives of everyday Australians.

The Lottery Office supports charities and community groups across the country, donating a percentage of every ticket sold to The Lottery Office’s Charity and Community Benefits Fund. Over the years we have donated thousands of dollars to organisations such as Meals on Wheels, OzHarvest, Guide Dogs Victoria, NSW Rural Fire Service and more.

Buy your European Millions ticket and be in the draw to win millions! Sign up with The Lottery Office and don’t miss the next EuroMillions superdraw!