US Mega Millions: The Lottery That Keeps Getting Better

Like a nice bottle of red wine, US Mega Millions lottery just keeps getting better with age!

This popular US lottery has been putting smiles on the faces of winners for more than 20 years and doesn’t seem to be slowing down! It’s one of our favourite lotteries in the world, that’s why here at The Lottery Office we give you the chance to win from the draws of this famous international lottery twice a week.

The big game kicks off

When it began, US Mega Millions was originally called The Big Game. In 1996 this exciting lottery showed up in six US states, Georgia, Illinois, Maryland, Massachusetts, Michigan, and Virginia. The lottery proved to be so popular across the US that they soon added another draw, meaning this life-changing lottery had two draws a week! In 2002 The Big Game changed its name to US Mega Millions. By 2010 there were 33 states participating in the draw, eventually growing to the now 45 states and the District of Columbia and the US Virgin Islands.

Over the years US Mega Millions has altered the game by adding second-tier prizes up to US$5 million. They have also changed the game matrix and changed the prize structure to enable jackpots to be bigger and come along faster. They’ve also given players better chances than ever before to win the second division prize of US$1 million.

It’s not called Mega Millions for nothing 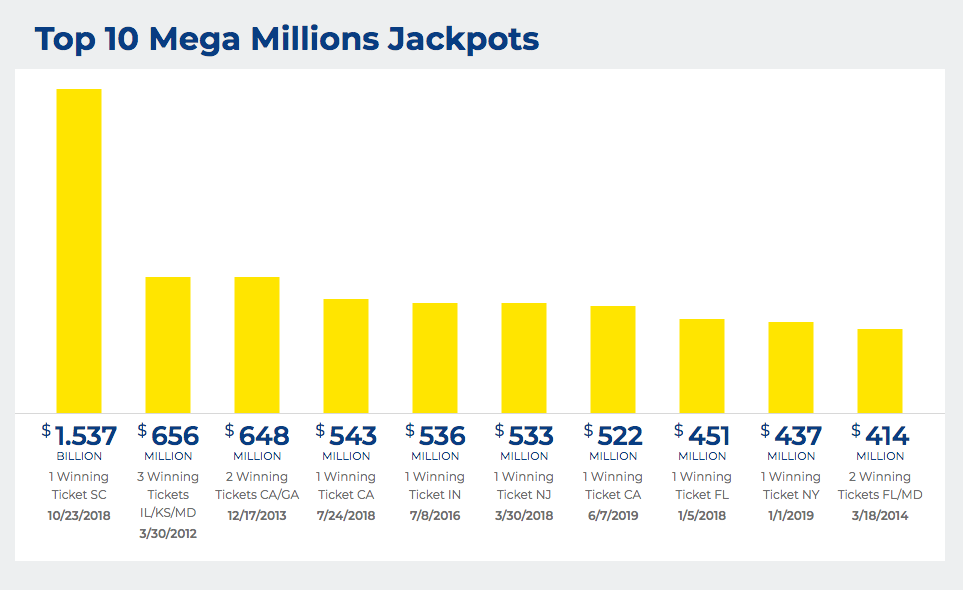 When you purchase a ticket in The Lottery Office’s US Mega Lotto, we will purchase a matching ticket in the US Mega Millions lottery conducted in the US. If you win, we pay you the exact amount we collect from US Mega Millions. With two draws every week it’s easy to play. To win, match all five main numbers drawn from a pool of 70, and the mega ball which is drawn from a separate pool of 25. The jackpot is rolled over if there are no winners, at least US$5 million (approximately AUD$6.8 million) more each time!

For a mere $3.45 you can select the Multiplier feature and increase any non-jackpot win by up to 5 times!

Unlike other online gaming companies where you bet on an outcome when you play USA Mega Lotto with The Lottery Office, we purchase a matching ticket in the US Mega Millions draw in the US. As proof of purchase, you’ll receive a real ticket in our lottery draw. The Lottery Office is safe to play, we are government licensed and audited to ensure we meet all regulatory requirements.

What are you waiting for!

Get onboard and PLAY to win from the draws of this well-known US lottery. Sign up for an account with The Lottery Office and start playing today!